Kingdom Gun is a Roguelite Shooter with elements from RPGs and action platformers! You are sent by The Kingdom to explore and conquer a recently discovered continent. Your reason for exploring the continent depends on the character you choose! Loot, glory, conquest, vengeance, or just for fun! Every run is different! Permanent death and item randomization! Every run allows for endless progression. Online Multiplayer will be available in the final version!

6 playable characters will be available at launch!

The Blacksmith is where you go to upgrade your items!

Pretty crazy, but lots of fun! Had a blast grabbing all the different abilities! Hope you enjoy the video!

This game was a ton of fun! I made a review for it. I hope I covered all the bases!

This game was super fun! The engine is GMS 2.3 or an older version?

Finally a good rogue like game that is free!

This game look cool. The idea is in future can shoot in ani direction?

good demo but not to long

this is best rogue-like game i've ever played, and i played  a lot

this is the best game i have ever played

Omg demo is brilliant! no means i'll buy full game.  i can tell there are same flaws for example there is no story at all or it just me? :D anyway that stuff addicting as hell. good work

Good demo! The only thing missing now is some more content. I'll be waiting.

I can't say Im a big fan or Risk of Rain like games.  I would have to say this was very enjoyable.

I will say at times just with the amount of effects your character can get as well as enemy fire w/ boss attacks, it does get very cluttered. But with type of game i think thats unavoidable.

I also noticed you used a fist as a Q special. Im guessing because the character has an afro its related to the black lives matter movement? Seeing how it looks pretty much like that symbol. I would be careful since they are an organization, they might sue for using there symbol, just a heads up.

Other than all that the weird guns and the constant gaining of equipment was fun and kept me playing longer.

Is it also possible to add a mini map, because after fighting the boss and all it takes me another couple of minutes trying to find where the portal was an really slows the vibe. Maybe add an arrow pointing to the exit after you kill the boss? I dunno. Cant wait for more.

Thank you for trying Kingdom Gun out! I absolutely agree with you on the visual noise and we've already done a lot to reduce that on internal builds. Nothing in Kingdom Gun is political commentary, it's just a video game to meme and have fun. Great idea with the minimap! We have already added it in an internal build. Appreciate you!

Hello devs! Just wanted to know if this game will be free on (full) release :)

Hello! Thank you for the message. The game will cost $19.99 on release, adjusted for different regions.

um... will the final version be released here? or @steam?

We will be releasing the final version on Steam!

How did you last that long lmao

Ah, so basically skill which I happen to lack

Yes, or I also recommend if you can defeat the boss with the initial weapon as well since they will give you experience and money and then you travel to the second dimension and open the money boxes where there will be more chance to get weapons and even power-ups (a lot of text )

when the full game is release will it be possible to make the character weapon follow the mouse so if it shoot at that direction it will go there?

im sure the full game there will be more pets

anyways i made a video to i enjoyed it looking forward for the full release Great game Mr.developer

We intended to make the game left/right shoot only.

Thank you for all your feedback! I have saved it to our internal "improvements" board. Because of feedback like yours we will make the game better!!

great game for a demo, I love everything about it, but if I had to change anything I would adjust the spawn rates and nurf the pearls because they are just a bit too op, but everything else is  amazing can't wait for full release <3

Thank you for the feedback fam! We are definitely using everyone's feedback to balance!! Come join our Discord!!

Hey. I don't know how to contact you, so I've decided to write here. I just want to ask if there is an opportunity that I can help with, like localization (Russian language)?

We have a Discord, feel free to join! We will be localizing to Russian, among many other languages.

game's pretty dapper ngl. but i wish you can aim freely using your mouse like commando 2 instead of just left and right. also nerf pearls and enemy spawn rate

Thank you for playing fam!!! The left/right restriction was planned early on. I hear you on the spawn rates! There will be balancing. Thank you for the feedback!

Very fun game, I made a review in Spanish for those of us who speak in a language other than English so you are invited to see what the game is about.

Thank you! We are hard at work improving it everyday. The full version will be released in October!!

this is actually pretty cool, but for positive critique i must say: maybe the levels need a little more variety on the "pieces" they use, the gameplay loop itself is good, but the levels being (for the time being) just a couple of plataforms dispersed by the screen makes it a little monotonus.

Thank you for the feedback!!

Aside from a couple of suggestions about this and that this game is SO MUCH FUN, everything from the graphics, to the general game play, the variety of content and the sounds design is perfectly blended into a fun and fast-paced experience, great job!

To anyone reading this, please give this game a play, or two, or five hundred!

if you switch characters you cant change guns without having to reload the game.

nvm I’m just a stupid cunt . It dosent do that.

I think the tutorial needs some work, maybe add the key you need to press to the tool tips? Also, I really dont like that i cannot aim my gun (other than left or right), I feel like this limits the action pacing of the game. Great artwork and gun variations though!

i think i'm stupid for asking this, but when i download the game, it appears as a zip file, and idk which file within the zip file opens the game. can you please help me?

its the file named projectgun.

Impressive, I played because it looked good in the visuals. But at the gameplay level it is great, highly addictive.

Thank you very much!!!

Had a great time! Although I say Chad mode is nothing much different from Larry (As I like to call it). After like 3 bosses, you're pretty much unstoppable. So maybe increase the enemy health and their damages? Would love to see the full version.

Thank you for the compliment and feedback! We will definitely be balancing and updating with player feedback!

Oh my god. This game was so much fun. Asides the occasional clicking out of the window even though I played in Fullscreen, this was great. I felt like I played Risk of Rain again. Which is one of my favorite games. I made even a video about it. Very nicely done. Hope the full version is even better.

u got a new system?

could be the reason, even if every other software runs... jump to w10 soon i would say.

Tyvm for the report! This will be fixed and pushed in the next couple of hours.

got some small issues but it is pretty good!

Thank you! We appreciate all feedback! I am always on Discord, if you would like to message me!

great game, really reminded me of risk of rain, but its still unique from that, and its really fun, i love this game, cant wait for updates

Great game and finished it and make into the highest difficulty (chuck noris) but it all has to offer because it is a demo and i would love to see more games like this and looking foward to the full release if i got the money. and the small flame breath dudes one shot me for (300 hp)

Impressive game. I'm not a big fan of roguelike games but this one made me like the genre. 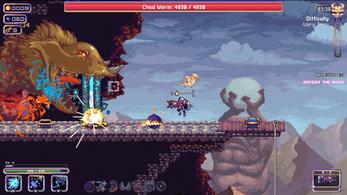 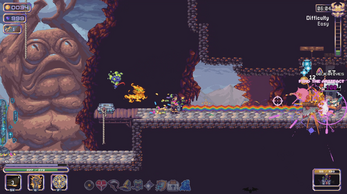 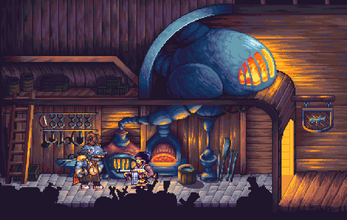 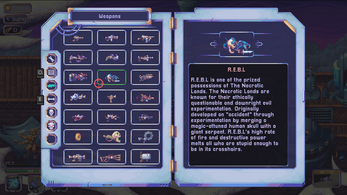